When it comes to sky-high interest rates, predatory payday loans and cash advances can't hold a candle to the fees banks charge when you overdraft your checking account.

Anyone with at least a few thousand dollars in their bank account can spend money relatively freely without worrying about bank overdraft fees. Sure, they can’t just buy a couple boats out of the blue, but they can probably get groceries and gas without having to constantly check their account balance.

For everyone that’s living paycheck to paycheck, however, the threat of overdraft fees is constant and can quickly make a terrible financial situation even worse. It might not be debtor’s prison, but getting fined for not having money feels sort of Kafkaesque.

So how bad are overdraft fees and how can you avoid them?

Bank overdraft fees are pretty significant and widespread. But don’t just take our word for it! Here’s some background on the current overdraft fee situation in America from Ilian Georgiev, CEO of Charlie, a text-based AI penguin financial advisor:

“We’re facing a plague—of bank fees. In 2017, Americans paid a mind-blowing $34.3 billion in overdraft fees alone (not including all the other abused bank fees paid!), the most paid since 2009 during the end of the Great Recession.

“On average in 2017, 38% of Charlie users overdrafted and paid $270 in fees—the equivalent of a month of student loans, eight months of wifi, or a smartphone upgrade.”

Bank fees tend to be around $35 or higher, and they can be charged multiple times in a short span of time. Some banks will also charge additional fees as time goes by on an overdrafted account. If you don’t immediately realize your account is overdrafted, those fees can quickly add up and you could be looking at hundreds of dollars worth of fines.

So why do banks charge overdraft fees?

To make money. Next section!

OK, to be fair, banks claim that overdraft fees are used to prevent bounced checks. But you can also get hit with an overdraft fee from trying to make an ATM withdrawal when you don’t have adequate funds, so that explanation might not be fully comprehensive.

“The short answer and the truth as to why overdraft fees are so high is there is no federal law regulating what a bank can charge,” explained RJ Mansfield, consumer’s rights advocate and author of Debt Assassin: A Black Ops Guide to Cleaning Up Your Credit. It’s a major source of income for many banks that charge from $25.00 on the low end to $38.00 at the top.”

So how can you avoid these fees?

The simplest way of avoiding overdraft fees is to make sure that you always have enough money in your account before paying for anything or withdrawing any funds. But just because it’s the simplest method doesn’t mean it’s the easiest. It’s a pain to constantly check your balance, and if you have any auto-payments set up, it’s easy for your account to become depleted without you even realizing it. There has to be a better way!

Well, there is. Actually, there are multiple better ways.

“There are overdraft protection agreements that link other accounts within your bank to your checking account to cover checks that would normally overdraw your account,” advised Manfield. “This service often involves a fee which will be substantially less than an overdraft charge.”

You can also go the app route.

“Overdraft protection apps like Dave will advance you money ahead of your paycheck in the case you would otherwise have no money and incur an overdraft fee,” offered personal finance writer Dustyn Ferguson. “These types of services are fairly cheap, with the Dave app costing just $1 a month. Even if you incur overdraft fees on average just once per year, this $1 a month fee will still save you money!”

While not an app, Georgiev explained how Charlie, his chat-based financial advice AI, can prevent overdraft fees: “With Charlie, no fee will go unnoticed or get in the way of other, more useful expenses. On average, users have $114 in fees/year—but with Charlie they can track their spending, set up alerts, etc. to avoid putting any hard earned cash towards bank fees and to make sure their finances stay in shape.”

Setting up overdraft protections can be a hassle, but it’s much less of a hassle than dealing with overdraft fees. Getting out of a tough financial situation is hard enough without facing additional fines for not having enough money. But if you can remove the threat of overdraft fees, it’ll be one less thing to worry about on your journey to financial improvement. Dustyn Ferguson (@dustyndream) is the personal finance aficionado behind Dime Will Tell. He often blogs about his experiences and shares his secrets when it comes to making and saving more money to achieve financial success.

Ilian Georgiev is the co-founder and CEO of Charlie, a text-based personal assistant that helps average Americans worry less about money and have access to personalized financial advice. Prior to co-founding Charlie, Ilian was a Product Manager and the Head of Product in mobile gaming at Pocket Gems and Chobolabs. There, Ilian launched and scaled multiple chart-topping apps that have generated over hundreds of millions of revenue across hundreds of millions of users. When he’s not building penguins that talk about money and save you from your bills, Ilian enjoys sailing and using emojis in all parts of his life. He holds a B.A. in Economics and Mathematics from Vassar College and an M.B.A. from Stanford. 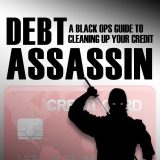 RJ Mansfield (@DebtAssassin1) is a consumer’s rights advocate and author of Debt Assassin: A Black Ops Guide to Cleaning Up Your Credit.

Considering Overdraft Protection? Here Are the Pros and Cons

What’s Worse: An Overdraft Fee or A Payday Loan?