Share This
OppLoans > Bob O’Connell, Head of Sales, “OppLoans has been like a resurgence for me. It gives me a reason to get up every morning. I thoroughly enjoy coming here to work with wonderful people.”

Bob O’Connell, Head of Sales, "OppLoans has been like a resurgence for me. It gives me a reason to get up every morning. I thoroughly enjoy coming here to work with wonderful people."

I came to OppLoans through our founder Todd Schwartz—and more specifically through his father, Ted, who was my mentor. In 1987, I went to work with APAC Customer Service Inc., which was a call-center business that he owned and operated. I moved up the ranks at APAC pretty quickly, and in 1992 Mr. Schwartz sold me the B2B segment of the company: Radio Group Incorporated.

I then took that small company—at the time, we had around 20 employees—and built it up into five call centers with roughly 150 employees. I sold the business roughly eight years ago and I retired for three years after that. My wife and I did a lot of traveling to Thailand, Rome, Iceland, a bunch of different places.

Being retired was great, but after a while I started to get really bored. I contacted Ted and he told me about this company, OppLoans, that his son Todd had founded. He asked if I was interested in coming and consulting on the Loan Advocate division—maybe even running it.

I told Ted that I didn’t know the first thing about the finance industry. And he said, “That’s okay, you know how to run a call center. You can learn the rest.” So I came on board in January 2015, thinking that I would only be there for a short time.

And here I am, going on my fifth year with the company. I enjoy every day of it! OppLoans has been a resurgence for me. It gives me a reason to get up every morning. I thoroughly enjoy coming here to work with wonderful people.

The first day I walked in, there were 17 Loan Advocates in the company. When I looked at them, I could see that no one was having any fun. It was just a job. So I walked downstairs to the 7-11 on the corner and I bought 20 dollar scratch-off tickets. I came back upstairs with a deal: the next person that closes a loan gets a scratch-off.

I wasn’t even sure what “closing a loan” even meant back then, I just wanted to some energy and life in the office. That was the icebreaker, to show employees that we were going to have fun here. We are going to work hard and make sure you’re paid properly, but we’re definitely going to make this a fun place to be.

It started with little things: Donuts on the Saturday morning shift, going out as a team to Miller’s Pub after work, things like that. But I knew that we just had to get that cohesion going and make people realize that friendships in the workplace are a critical element of success.

When you like the people you work with and you all have each other’s backs, that’s when great things happen.

And great things have happened. I’ve had the pleasure of watching this company grow—a lot. And no department has grown as much as the Loan Advocate and Customer Advocate teams that I oversee.

But even as our headcount has doubled and tripled and quadrupled, they still remain a very tight, cohesive group. Over the years, I’ve seen a lot of wonderful relationships that have been formed between co-workers.

Sure, as we have grown we’ve encountered some of the growing pains you’ll see at any company. You can’t have the same kind of cohesion with 200 people that you had with 20. That’s just inevitable.

But even those pains have been way milder than things you see at other places. That’s in part because we have grown very deliberately, never biting off more business than we could chew or sacrificing customer service for a quick buck. Beyond that, I think it’s because we have a nucleus of trust and relationships.

Building a culture like this can be a lot of fun, but that doesn’t mean it’s easy. It’s like a garden that you have to tend everyday or else everything is going to wilt. I think my favorite part of the job is recognizing the success of different team members on a day-to-day basis. When I arrive in the morning and I see someone who has never been at the top of the leaderboard and there they are, that warms my heart.

Little awards I have incorporated into the day-to-day go far. Take our traveling trophy for example, which I award to a different Loan Advocate at the start of every workday. I don’t care if you’ve been here for 10 years or you have been here for two days: People still get such a kick out of having that on their desk in the morning.

Maintaining this kind of culture starts with hiring the right kind of people—which gets harder the bigger we get. When I’m interviewing someone, I don’t care if they have 10 years of experience in the industry—if they have a bad attitude or seem like they’re going to drag our culture down, I won’t hire them.

Some people think having fun at work or having employees who are friends with their coworkers means your company won’t be a success. We’re living proof that that’s hogwash. Our number one priority is delivering five-star customer service, we’ve got an average 4.9 star rating across over 6,000 customer reviews, with more coming in everyday.

Being a Loan Advocate here means being empathetic for an entire eight-hour shift at a time. Have you ever tried that? It’s very rewarding, sure, but it’s also pretty exhausting. Delivering this kind of service takes work, hard work. Someone who’s good at it is worth keeping, because they are worth their weight in gold.

Some businesses look at their employees as cogs in a larger machine. We don’t. We see ours as investments. What we get from them starts with what we put in and what we do to help them grow. Not to toot my own horn, but I can say with confidence that every employee we have here on this floor is an extremely good investment.

In 1987, I got my start in life thanks to Ted Schwartz. Now all I’m doing is returning the favor. 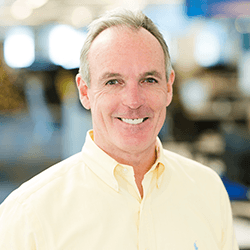 Bob O'Connell, vice president of sales, has been with OppLoans for four years and five months.
© Copyright 2020 | Opportunity Financial, LLC