Share This
OppLoans > Isaac Hamlin, Manager of CRO, “At OppLoans, good ideas are heard. And they’re not only heard, they are implemented.”

Isaac Hamlin, Manager of CRO, “At OppLoans, good ideas are heard. And they’re not only heard, they are implemented.”

As a fairly new addition to the OppLoans team, I can’t tell you how the company has changed over the years. What I can tell you is what the company is like now. And it is, without a doubt, the most open and encouraging work environment I have ever encountered.

In my career, I’ve worked everywhere from large agencies with massive national accounts to small startups — but OppLoans feels different from all of them.

Leadership here doesn’t care where ideas come from, they only care whether the ideas are good. And when it comes to testing changes, the company has been incredibly willing to try new things.

That’s great for me, because my job as manager of CRO is to try things! My job centers around website performance; looking for improvements, running tests, reporting results, and planning for future changes.

The ability to make large-scale changes that directly impact the business was a huge plus for me in taking this role. My favorite part of my job is to see how changes to the website push us towards our goals.

There’s really nothing more rewarding than making a change that you’re not entirely sure will work, and then seeing it positively affect the business. In some cases, you see the effect almost immediately. I love that.

At OppLoans, we set ambitious goals for ourselves and for the company as a whole. And it’s clear that we have the team to make those goals a reality. But beyond just hiring great people, the company then takes the extra step and puts them in the position to succeed.

The marketing department is filled with incredibly smart, hard-working people, and they welcomed me with open arms. Even though I’ve only been here for two months, I can say with confidence that they are the most productive and durable team I’ve ever been a part of.

People who have been at OppLoans since the beginning talk about how much bigger the company has gotten over the past five years. However, it has done a great job of retaining the mindset of a smaller, more agile company.

In the past, I’ve worked for companies that were much bigger than OppLoans, and they were all incredibly rigid. A big downside to that rigidity is that there was no room for people’s voices to be heard. Good ideas simply got drowned out if they weren’t coming from the “right” person.

But at OppLoans, good ideas are heard. And they’re not only heard, they’re implemented. Even if you’re not sure whether a certain change or idea will work, I’ve found that leadership is willing to hear you out and give it a try.

The management style here is all about hiring someone great to do a certain job and then trusting them to actually do it. I’ve encountered every different management style over the years—from the worst micro-managers to the extremely hands-off varieties—and OppLoans strikes a good balance between the two.

It’s been clear to me from the get-go that OppLoans is a great place for people who aren’t just doers but are movers as well—folks who want to go out there and make changes that can push the company forward.

I know some pretty smart people, who are much smarter than me, who I think would absolutely love to work in a place like this, where everything is open and where their ideas can be heard. As the company keeps growing, I’ll definitely recommend to them that they apply. 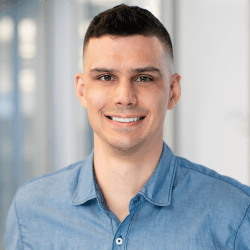