Opploans Blog Budgeting Expenses Debt What Happens To Your Debt When You Die?
Updated on: May 20, 2020

What Happens To Your Debt When You Die?

Once you shuffle off this mortal coil, your debts will get paid back out of what you leave behind. But don't worry, debt cannot be inherited.

But that doesn’t mean you should avoid thinking about how your financial affairs will be handled after you pass, especially if you’re in retirement or getting close to it. Heck, if you are an adult of any age and you don’t have a will, you should probably get one of those, stat.

One of the questions that a lot of people have about death involves their debt. What happens to it after you die? Does the money you owe on your credit cards expire as well and go to some sort of financial heaven or hell? What about mortgage debt or student loan debt or unpaid loans?

Your debts don’t disappear when you die.

Debt is like the memories of your loved ones: it will persist long after you’ve perished from this earth. Just because the person who owes a debt has passed away, that doesn’t mean that the debt ceases to exist. That creditor is still owed that money.

The question becomes: Will they ever get paid back? And the answer is: They will certainly try, but it will depend on a couple different factors.

First, it will depend on who was responsible for the debt. If you took out a credit card that was in your name only and you die with an outstanding balance still on that card, then your heirs will not be responsible for paying it back. A person’s debt doesn’t die with them, but the obligation to repay that debt certainly can.

(There are also certain exceptions to this rule if you live in a “community property” state. More on that below.)

Then there’s the issue of the “estate” you leave behind when you die. And here’s where dying with a lot of outstanding debt can really punish the loved ones left behind.

Debts will get paid back out of your estate.

When a person dies, they usually leave a lot of stuff behind. That can include a house, a car, furniture, jewelry, and money in their bank accounts. This is commonly referred to as a person’s “estate” and it is the sum of their net worth.

That estate will then get divided up between the person’s heirs. (This is where a will comes in super handy.) But they are not the only ones who have a claim to that estate. The deceased person’s creditors do as well.

“The good news for the heirs of a decedent is that you cannot inherit a debt unless you were a co-signer on the account,” says attorney Ted Bond, Jr., an expert in estate planning and founder of The Law Offices of Thaddeus M. Bond, Jr. & Associates, P.C. “This does not, however, mean that the debt simply goes away because a person passes away. When a person dies, they leave behind an estate which constitutes all of their remaining income, assets, and liabilities. If the estate has sufficient funds to pay the debts, they must be paid. If the estate has insufficient funds, the debts are canceled and do not transfer to the family of the person who passed away.”

So while it’s impossible for a debt to be passed from parent to child, like red hair or a crippling fear of snakes, it is very possible that a debt can cancel out any inheritance that the child would stand to get. If your parent died with an outstanding installment loan or even a payday loan or title loan, that debt will get paid before you do. However, some states have protections for the benefits from life insurance policies.

While creditors will generally get first crack at an estate before any potential, there is an additional hierarchy amongst those creditors. As Bond puts it:

“Certain debts are given priority and must be paid first: funeral expenses, tax debts, or money due to employees of the decedent are common priority claims. The exact order those debts must be paid is dependent upon the laws of the state where the person resided on the day of their death. It is important to know that you cannot expect to receive any type of inheritance until the estate’s debts are paid. Most states have a procedure set up for creditor claims to be filed against an estate which include strict time limits. Final distribution to the heirs cannot take place until those time limits have expired.”

If you live in a “community property” state the rules for inherited debt are different.

So far we’ve talked about how the only person legally obligated to pay back a given debt is the person (or persons) whose name is on the loan agreement. Well, if you live in a community property” state, that’s not exactly the case.

And speaking of student loans, those can be a special case. Federal student loans are discharged upon the death of the borrower, but private student lenders will try to collect from the borrower’s estate or will hold the co-signer responsible for repayment.

The less debt you have, the more money you’ll be able to pass on.

According to the credit experts at Experian, 73% of Americans die with outstanding debt, with an average debt load almost $62,000. The majority of that is mortgage debt, with the average amount of personal debt totaling almost $13,000.

So while you don’t have to worry about sticking your heirs with a bunch of uncollected debts, you should be concerned about those debts eating up their inheritance. The less debt you have and the more money you save, the more you can pass on when die. 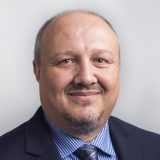 Ted Bond, Jr. has been practicing law in his native Illinois for over 25 years. Since founding The Law Offices of Thaddeus M. Bond, Jr. & Associates, P.C. in 1996, he has helped many families with estate planning such as wills, trusts, powers of attorney and probate court matters. His law firm also tries real estate, family law and business cases throughout Lake County and nearby areas of northern Illinois.

Ease the Financial Burden of Funding a Funeral