Does the Debt Snowball Method Work? 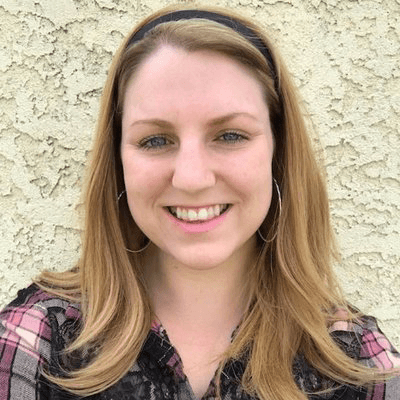 Kylie Ora Lobell
Kylie Ora Lobell covers a range of topics, including personal finance. She has written for The Washington Post, New York Magazine, the Los Angeles Times, the Jewish Journal of Los Angeles, and Forbes.
Updated on March 18, 2021

The debt snowball method of paying off your debt takes small steps to make a big difference.

The average American carried about $8,400 in credit card debt in 2019, according to nonprofit Debt.org. From student loans to credit card debt and mortgage debt, many Americans have some sort of personal loan to pay each month in addition to their regular costs of living.

Having a lot of debt can be extremely stressful. Juggling debt may lead to having less money for other expenses, accumulation of high-interest payments, and a suffering credit score.

If your debt is keeping you up at night, there are options to get the ball rolling –literally — on a bite-size payoff plan, also known as the debt snowball method.

What is the debt snowball method?

The debt snowball method, which was popularized by personal finance guru Dave Ramsey, involves paying off your smallest debt first, no matter the interest rate on the debt, by following these steps:

Here’s an example of how the debt snowball method works:

Let’s say you have a credit card with a balance of $500, and decide to put $50 toward it each month in addition to your minimum payment, which is $25. Your total monthly payment on that debt is now $75. Once you pay off that $500 bill, take the $75 you were putting toward it each month and use it to attack the next smallest debt.

For example, let’s say the minimum monthly payment on your next debt is $35. Your total toward repayment each month would be $110. Keep doing this until you pay off the bill, and then start again with the next smallest debt.

To best illustrate how the Debt Snowball works, let’s take the example of a hypothetical guy named Bill. When Bill tallied all of his loans and credit cards, he discovered he had $44,500 in debt. This was negatively affecting Bill’s credit score, so he decided to pay off his debt using a debt snowball.

Bill began by organizing all of his debts in ascending order from smallest to largest. He made sure to also include the minimum payment for each debt. His spreadsheet looked something like this:

Bill’s smallest debt was his Department Store Card, which only had a $1,500 principal balance. He took the $838.42 in extra funds and added it to the monthly minimum payment of $31.25. This meant he was paying a total of $869.67 per month. In two months, Bill’s Department Store Card was entirely paid off.

Here’s a visual example from OppU of how the snowball method works: 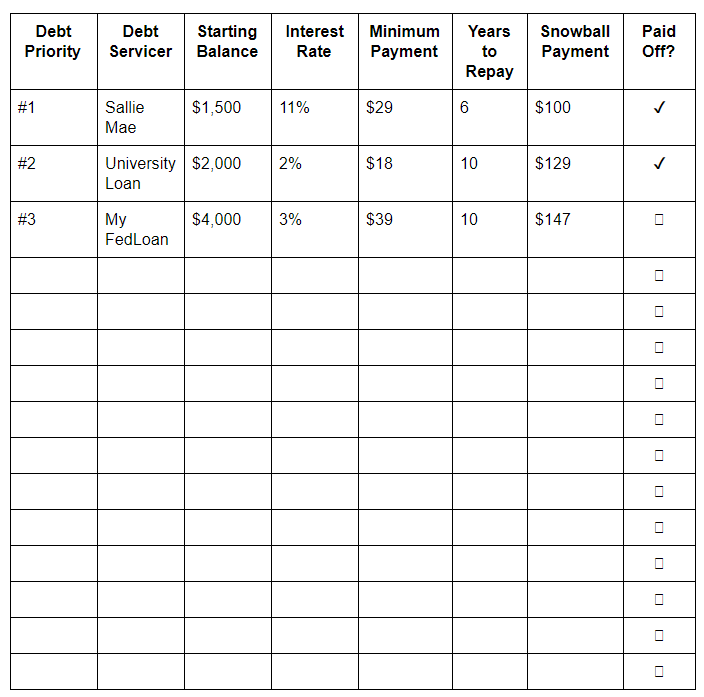 What is the debt avalanche method?

The debt avalanche method is the opposite of the debt snowball method, focusing on long-term costs instead of quick wins. The only similarity is that you pay off the minimum on all your debts every month and choose to attack one debt with additional funds.

However, this time, you’re going after the debt with the highest interest rate first. Follow the exact same practice of putting a certain amount toward your highest-interest debt each month, then move onto the second-highest, rolling over your previous payment into that one, until you go down the line and eventually make all your debt repayments.

Here’s another example from OppU, this time for the debt avalanche method: 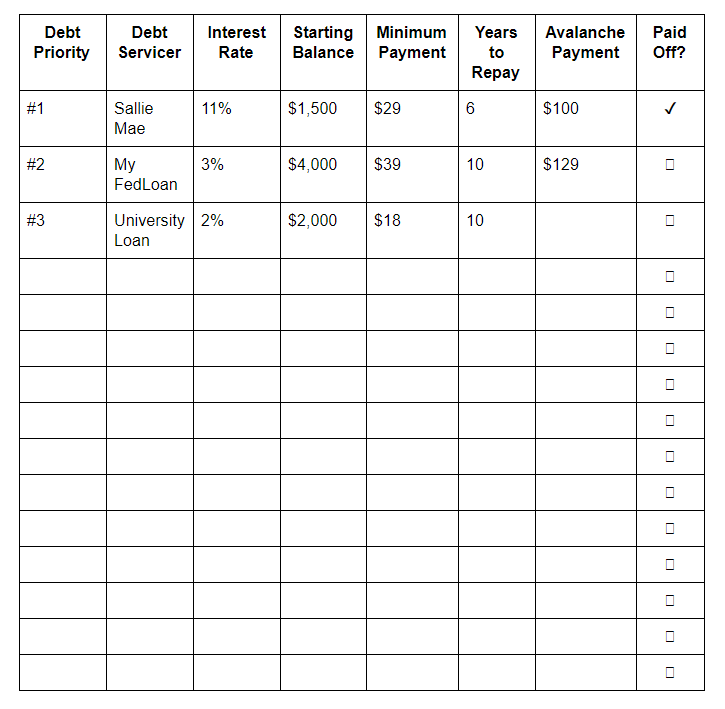 The debt snowball plan works better for some people on a psychological level. “I often assist clients with the debt snowball method for two main reasons: motivation and simplicity,” said Ben Watson, virtual chief financial officer at DollarSprout. “Often, people struggling with multiple debts feel overwhelmed and frustrated that they’re not making much progress, if at all, in paying down the money they owe. By creating a plan to tackle the smallest balance first, they can quickly see traction and become motivated to pay it off faster.”

There is a drawback to this method: By paying off the debt with the lowest principal instead of the one with the highest APR (like you would in the debt avalanche method), you can end up paying more for your bills in the long run. However, Dave Ramsey has been quick to point out that one of the major benefits of the snowball method is how it rewards people with early successes. Paying off that first debt feels good — really good. And that feeling encourages people to stick with the occasionally painful process of living well below their means.

If you’re in a situation where you don’t have much expendable income every month, then you may find that debt snowball works better for you than the debt avalanche method. “For those living paycheck to paycheck, it is likely that the avalanche method won’t work, as you have likely been making only minimum payments since you went into debt in the first place,” said Robyn Flint, a writer for Loans.org. “So the debt snowball will likely create more success and momentum at clearing debt off of your credit report.”

Still, if you can, other experts recommend the avalanche debt method since it makes more sense financially. “While someone is using the snowball debt method, they could be racking up significant amounts of interest because they aren’t paying off the debts with the highest interest rate first,” said Rebecca Hunter, CEO of The Loaded Pig.

While both the debt snowball plan and the debt avalanche method are effective, trying out each one and seeing which helps you pay off debt faster may be your best bet. “It’ll likely be the one that motivates them that provides the greatest benefit,” Watson says.

Climbing out of debt faster

To speed up the debt payoff process, create a budget according to your paycheck. Freya Kuka, owner of the personal finance blog Collecting Cents, said you could use a calendar to write down upcoming expenses for the month, give every dollar a job, and utilize the envelope system to put the allocated cash for every category into its own envelope.

Kuka also recommended deleting your credit card information from online stores, since it’s much easier to spend online when your information is already saved in their system. Cut any unnecessary expenses and aim not to take on any more debt. These moves will help you to climb get out of debt faster than if you didn’t find a way to curb your spending habits.

“The quickest way to pay off debt is to increase your income and decrease spending,” Watson said. “A lot of time people only focus only on one by either cutting discretionary spending or working extra hours. Combining the two will speed up your debt-free date.”

Build and Boost Your Credit (While Paying Down Debt)

Climb Your Way Out of Debt: 4 Strategies to Try