skip to main content
OppLoans OppU Articles How Much Do Grandparents Spend on Holiday Gifts?

How Much Do Grandparents Spend on Holiday Gifts?

By
Read time: 10 min
Updated on December 1, 2021
The researchers at OppLoans surveyed over 1,700 grandparents nationwide to find out!

One of the best things about being a parent is the hope that one day you’ll get to be a grandparent. That’s when the fun really begins. Instead of worrying about raising those grandkids, you get to swoop in with gifts and sweets and pay your kids back for all the times they ever annoyed you when they were children.

For the 2018 Holiday Season, our team at OppLoans decided to find the answer. We surveyed over 1,700 grandparents across all 50 states (plus the District of Columbia), asking them how much they spent on holiday gifts, whether they felt their gifts were appreciated, and whether they ever foresaw stopping the grandkid gravy train altogether.

Once we had our answers, we broke the results down by state, age, and gender. Here’s what we found! 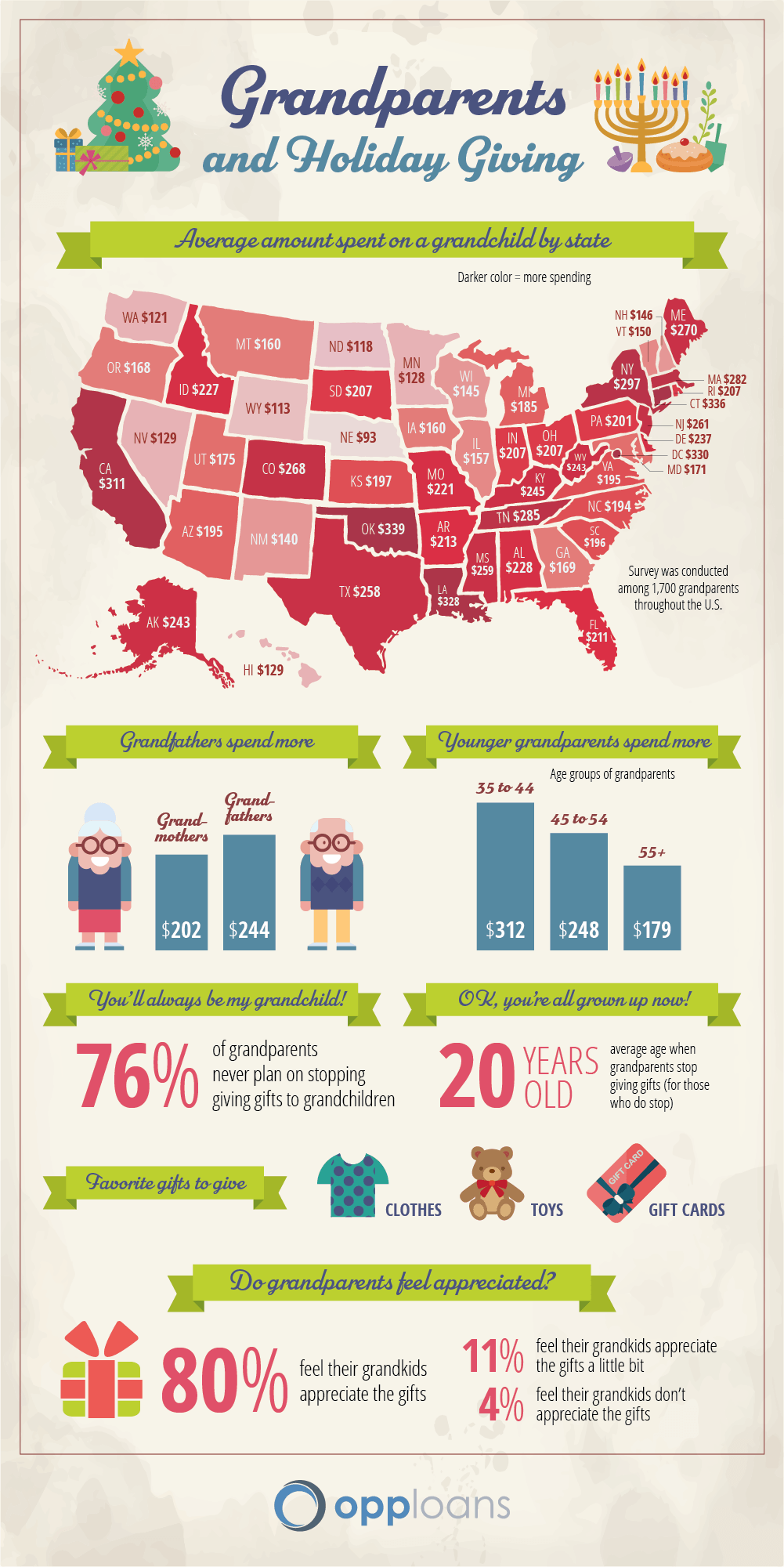 Which state’s grandparents spend the most?

Congrats are in order for grandparents in the Sooner State, who reported spending $339 per grandkid on gifts, more than respondents from any other state in the whole country. But grandparents in Connecticut and Washington D.C. are hot on the heels, with a reported $336 and $300 spent per grandchild, respectively.

In last place were grandparents from Nebraska, who apparently take that Midwestern sense of frugality thing to a whole new level. They only spent $93 on holiday gifts per grandchild, a full $20 less than grandparents in Wyoming, who came in second to last. Rounding out the bottom five were North Dakota ($118), Washington ($121), and Minnesota ($128).

Of course, the more grandparents spend on holiday gifts for their grandkids, the more they run the risk of overspending and racking up debt. When we mentioned “Midwestern thriftiness” in the previous paragraph, we didn’t mean it as a slight. Quite the opposite.

“It is key to budget, track and prepare when shopping to avoid overspending,” said Ken Mahoney, CEO of Mahoney Asset Management (@mahoneygps). “We often add an extra item to the basket or must have the most recent toy or fashion item, however, these expenses soon pile up. Creating a Christmas list to stop impulse buying and additional unneeded purchases is necessary.”

Mahoney had some additional advice for grandparents to help them stay within their budget:

“Don’t hesitate to inquire with a sales associate to uncover ways to save. For example—unadvertised coupons, upcoming sales—inquire about senior citizen saving days or promotions, and layaway programs. Whether it be 10 percent or even 20 percent off, it could be the easiest $100 you save.”

Honestly, it was good to see older grandparents (who are more likely to be living on a fixed income) spending their money responsibly.  And, heck, for grandparents who want to spend more, there are ways for them to earn extra income!

“One way to get away from stressors and maintain some freedom is by spending quality time with fun-loving pets. Sites like Rover.com can connect you with good paying dog-sitting and dog-walking opportunities in your area.  And lots of people are in need of pet care around the holidays.

“Sitters are able to choose their own rates and have the flexibility of scheduling their work around their availability. Rover’s sitters/walkers can easily find a gig daily and earn well over $1,000 per month. That kind of cash influx goes a long way in budgeting for the holidays.”

Don’t let that holiday spirit lead to a high-interest hangover.

Although this wasn’t one of the questions we included in our survey, it’s a fair bet that many of the grandparents who responded are putting their holiday shopping purchases on a credit card. And while credit cards can be a great way to earn points, maintain your credit score, and avoid those “it’s two days till payday” blues, they can also be pretty dang risky.

As such, here are some helpful tips from Brittney Mayer, credit strategist at CardRates.com (@CardRates), to help grandparents shop smarter and avoid making “get out of all that holiday debt” their default New Year’s resolution:

“Don’t max out your cards. Avoid carrying high balances. CardRates.com states that your utilization ratio (which is what you owe over your available credit) is a huge part of your credit score.

“Don’t use more than one or two cards when possible. Spreading out all of your purchases can make juggling monthly payment harder to manage.

“Don’t sign up for multiple retail credit cards. They may be enticing at checkout when the clerk offers a 10-20 percent discount off your entire purchase, but oftentimes these cards can come with high interest rates and your credit score can also be adversely affected by opening multiple accounts.

“Use cards that offer rewards. You’ll get cash back, points, and miles depending on the type of card you use.  All of your holiday purchases can add up very quickly so you might as well maximize your rewards.  You’ll have to make sure you are paying off your balance each month, though.

“Use your card’s activity alerts. You can set up notifications to alert you of purchases made with your account. This can help you stay on track and avoid any fraudulent activity during the busy shopping season and save you a lot of money recovering stolen information or, heaven forbid, personal funds.”

Most grandparents feel their gifts are appreciated.

One of the other questions we asked was whether or not grandparents felt their gifts were appreciated, and we were glad to find that the vast majority of them do!

Maybe those latter grandparents are the ones who plan to stop giving when their grandchildren reach a certain age. Seventy-six percent of respondents said they never plan on stopping giving gifts to grandchildren, but the ones who did cite an average age of 20 as their planned stopping point.

Clothing, toys, and gift cards were the favorite gifts for grandparents to give, according to our survey. But grandparents who plan to keep giving gifts to older grandkids might want to consider giving them the gift of money instead of the gift of, well, gifts.

Lastly, 15 percent of those surveyed said they had been given a spending limit by parents. But that’s the great thing about being a grandparent, right? Sure, they can give you a spending limit, but that doesn’t mean you have to abide by it …

If you enjoyed this piece, check out these other posts and articles from OppLoans:

All data and images in this report are free to share and post. However, please provide a link back to this page to ensure context and accuracy.