skip to main content
OppLoans OppU Articles How Much Do People in Your State Spend on Valentine’s Day?

How Much Do People in Your State Spend on Valentine's Day?

Alex Huntsberger
Alex Huntsberger is a personal finance writer who covered online lending, credit scores, and employment for OppU. His work has been cited by ESPN.com, Business Insider, and The Motley Fool.
Read time: 6 min
Updated on April 1, 2022

Find out which state is planning to spend the most, and which two states are tied for last place with plans to spend a whopping zero dollars.

What are your plans for Valentine's Day this year? Are you thinking a quiet, inexpensive night in with a home-cooked meal and romantic movie? Or are you thinking a massive, expensive blowout with a fancy dinner, carriage ride, and a personal string quartet?

People celebrate (or choose not to celebrate) Valentine's Day in tons of different ways, each with their own price tag. So how does the cost of your plans compare to the cost of other people's? Are you spending more or less than the average person? Wouldn't you like to know?

It's funny you should ask!

We conducted a Google Survey, asking almost 2,500 people how much they're planning to spend this Valentine's Day; then we broke the results down by age, gender, and state of residence (including Washington D.C.).

Overall, it looks like people aren't breaking the bank this year. On average, folks are planning to spend just $33.64 on Valentine's Day festivities, an amount that will barely cover the cost of a movie for two and some snacks – let alone dinner, a gift, or any heart-shaped chocolates.

So how did your state do? Whether you're deeply offended or incredibly proud of the numbers from your home turf, there are other ways to break down the results of this survey. Take a look at the following stats:

The numbers might be a little lower than you thought, but it all seems to track, right? Well strap on your big kid pants, cuz here comes the real doozy:

That's ... more than we anticipated. Is something happening out there, America? Something we should be made aware of? Are you all doing okay? Do you want us to talk to Oprah? See if there's something she can do?

That's okay. No need to respond. We'll talk to Oprah and get back to you.

The award for cheapest (or perhaps loneliest) state goes to... It's a tie! Respondents from Alaska and North Dakota all reported spending $0 dollars on Valentine's Day. To be fair, it gets very cold in both those states come February, so maybe folks are just cuddling up for the night.

The 10 highest-spending states all spent above $42. Aside from New Mexico, three states spent above $60: Connecticut, Missouri, and Texas. The next six states on the list–Louisiana, Idaho, Hawaii, Alabama, Tennessee, and Kansas–all spent between $42.04 and $48.85. Oddly enough, no state recorded an average spend in the $50-range.

Idaho has the highest average spend for women. Female respondents in Idaho reported spending an average of $71.50 on Valentine's Day, more than in any other state. Oh, and for what's it worth, men in Idaho only reported spending $26.25. If there's an uptick in Idaho boyfriends being sent to sleep on the couch come February 15th, we'll know why.

Maine is the only state where the average spend (non-zero category) was below $10. Congratulations? We guess? Respondents in Maine are planning to spend an average of $9.67. So while that's better than the goose eggs put up by North Dakota and Alaska, Maine is still the only state where people planned to spend money and yet couldn't even crack a single Hamilton.

Here's how much men spent broken down by age group:

And here's how much women spent by age group:

Overall, ages 18-24 spent the least. This makes a lot of sense. Folks between the ages of 18 and 24 are just starting out in life, which translates to less disposable income to spend on stuff like Valentine's Day. We're sure they made their partners lots of great coupons for "free snuggles" and "one home-cooked meal" though. Spending also tails off once folks hit 65-plus, which is also understandable. Once you've through half a century of Valentine's Days, the luster kind of wears off.

Men ages 55 to 64 spent the most. On average, they spend $60.42. The previous male age groups averaged around $41. That's an almost $20 jump! Maybe after spending 30 years averaging around $41 per Valentine's Day, older men need to step up their game for their partners, who may have grown tired of the same old, same old V-Day routine.

Women over 65 are the only group that spends more than their male counterparts. We're just going to speculate wildly that this correlates with women having a longer average lifespan than men. Clearly, they're getting back out on there on the dating scene and experiencing the romance of Valentine's Day anew!

If you and your S.O. share a lot of nerdy sci-fi passions, check out our post where we calculate how much it would cost to fly to every Star Wars filming location.

If you're worried about your partner's poor credit, check out our post on how a partner's bad credit can affect you. 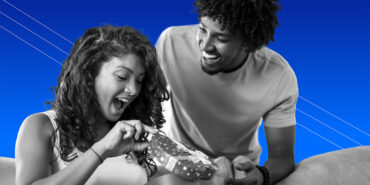 Is Valentine's Day a Fake Holiday?