Is Valentine’s Day a Fake Holiday?

Alex Huntsberger
Alex Huntsberger is a personal finance writer who covered online lending, credit scores, and employment for OppU. His work has been cited by ESPN.com, Business Insider, and The Motley Fool.
Read time: 5 min
Updated on May 26, 2022

Would you believe that Valentine's Day got its start 2,000 years ago as a drunken Roman fertility festival?

Last year, Americans spent almost 20 billion dollars on Valentine’s Day. And sure, a lot of them got in good with their respective partners and boos. But was that really money well spent?

After all, isn’t Valentine’s Day a fake holiday invented by Big Greeting Card to sell, well, cards and also chocolates and candy and stuffed teddy bears and restaurant reservations and carriage rides? (Don’t even get us started on Big Carriage Ride.)

Actually, no. Valentine’s Day wasn’t “invented by the greeting card companies.” It has a long and storied history. And so does the charge that Valentine’s Day is becoming “too commercialized.” People have been saying that for well over 150 years.

Here’s how it all went down…

Valentine’s Day 1.0 was a wild and crazy Roman fertility festival.

Back in the glory days of the Roman Empire, Roman citizens had this little fertility festival called “Lupercalia.” It was celebrated from February 13th—15th and involved sacrificing various animals like goats and dogs.

Oh, and women would also get whipped by the men using the hides of the animals they had just killed. Apparently, it was supposed to make them fertile.

Would it surprise you to learn that this festival involved a lot of drinking?

The festival also had, ahem, interesting features like a “matchmaking lottery” where men and women would be randomly paired up, sort of like a proto-key party.

All in all, the affair was extremely Roman. But other than the “fertility” theme, it bore little resemblance to modern Valentine’s Day.

So what happened? Well, the festival was popular enough that it lasted well into the 5th century AD, which is when the Catholic Church got involved.

Pope Gelasius I and the mystery of the multiple Saint Valentines.

In the 5th century AD, Pope Gelasius I was faced with a popular holiday that did not exactly reflect good Christian ideals. So he created the feast of Saint Valentine. This holiday would also be celebrated in mid-February, and Lupercalia was essentially absorbed into it.

But here’s the funny thing about that: nobody is really sure which Saint Valentine the feast day is meant to celebrate.

You see, there were a couple of saints named Valentine, both of whom were put to death by the Romans. And even their origin stories are kind of murky.

It’s very likely that the Saint Valentine commemorated by the feast day was an amalgam of these different figures. Still, it’s a little funny to think about a holiday where nobody understands what or who is being celebrated.

Like Arbor Day. People say that holiday’s about “trees” or something. But that … no that just can’t be right. Sorry.

The Middle Ages, Chaucer, and “Your Valentine.”

As the Middle Ages progressed, Valentine’s Day gained a reputation for being the lover’s holiday.

Some scholars credit the famed English poet Chaucer as the man who turned Valentine’s Day into the day to celebrate romantic love. (You might remember Chaucer from freshman year English and literally no place else.) In his poem, Parliament of Foules, Chaucer asserts that Valentine’s Day is the day when birds choose their mates.

One of the earliest recorded uses of “Your Valentine” as a romantic sign-off came in 1415, in a letter sent by the Duke of Orleans to his wife after he had been captured at the Battle of Agincourt. He wrote: “I am already sick of love, My very gentle Valentine.”

And speaking of Agincourt, William Shakespeare referenced Valentine’s Day in his little-known and rarely performed play Hamlet. When Ophelia goes off her rocker, she sings: “Tomorrow is Saint Valentine’s day, All in the morning betime, And I a maid at your window, To be your Valentine.”

Anyway, before we go on and quote half the Western Canon at you, let’s skip ahead to the time when Valentine’s Day started getting commercialized…

By the latter half of the 18th century, the tradition of sending romantic Valentine’s Day poems to your partner/the person you would like to be your partner had become culturally entrenched in England. Along with the poems, it was tradition to send your love an actual Valentine–aka a fancy card done up with colors and lace.

Turns out that the notion of celebrating romantic or “courtly” love was catnip to Victorian society. And as printing technology improved, so did the number of pre-made Valentines.

By the 1840’s, stationery stores and craftsmen had realized that they could make a pretty penny on Valentine’s Day and would advertise their Valentine’s Day cards and other wares in the local papers.

People started to take notice of how commercialized Valentine’s Day was getting. In 1847, an article ran in the New York Daily Tribune decrying this newfangled, money-grubbing version of the holiday:

“There was a time when Valentine’s Day meant something. Then it was a business of real lovers and there was sweetness under its delicate shy disguise … We hate this modern degeneracy, this miscellaneous and business fashion. Send a Valentine by the penny post too? Bah! Give us the sweet old days when there was a mystery about it.”

The holiday only got more commercial from there.

In 1848, a Massachusetts woman named Esther Howland started making the first ever mass-produced Valentine’s Day cards. Her sales quickly rose to over $75,000 a year. That’s over 2 million in today’s dollars.

In 1861, the British chocolate maker Richard Cadbury started selling special boxes of Valentine’s Day chocolates. Can you guess how those boxes were shaped? That’s right: They were shaped like hearts.

Fast forward to the 20th century. In 1907, the Hershey’s Company introduced their now-iconic chocolate kisses. And in 1913, the Hallmark Company started selling their own brand of Valentine’s Day cards.

So the next time someone tells you that Big Greeting Card invented Valentine’s Day, you can tell them that “Big Greeting Card” was half-a-century late to that particular party. 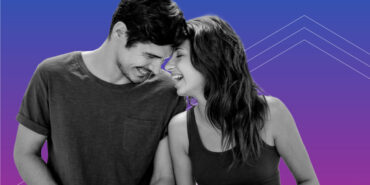 How Much Do People in Your State Spend on Valentine’s Day?