Alex Huntsberger
Alex Huntsberger is a personal finance writer who covered online lending, credit scores, and employment for OppU. His work has been cited by ESPN.com, Business Insider, and The Motley Fool.
Read time: 5 min
Updated on February 22, 2022

Turns out that a number of famous U.S. Presidents weren't so great at managing their personal finances.

Have you heard the one about the ex-president who was so broke upon leaving office that he had to move in with his mother-in-law? If you had to guess, which president do you think got a speeding ticket while in office? Did you know that Thomas Jefferson’s poor financial decisions are the reason we have the Library of Congress?

You'd think that all U.S. presidents would have a history expert financial management, right? Well, you'd be wrong. When it comes to handling their personal finances, our presidents are kind of a mixed bag.

We reached out to financial expert Harrine Freeman and she provided us with a whole trove of presidential money facts. Enjoy!

1. When George Washington was elected as the first president of the United States, he refused to accept the office’s $25,000 salary. He was later convinced to take the paychecks in order to set a good precedent for future office-holders. It is now against the law for a US president not to take a salary.

3. When Washington married his wife, Martha, she was by far the wealthier of the pair. Her money came from her first husband, Daniel Parke Custis, who was almost twenty years older than her and died after only seven years of marriage.

4. It's against the law for a living president’s likeness to be printed on U.S. currency. This dates back to Washington’s refusal to have his portrait printed on the U.S. dollar. In 1866, this tradition was made law by an act of Congress.

5. Even though George Washington was one of the wealthiest people in the whole country, the nature of farming meant that he had very little free cash on hand. That’s why Washington had to borrow $600 from a neighbor in order to attend his own inauguration.

6. Thomas Jefferson was in debt for pretty much his entire life. In 1815, he was forced to sell his library to the government in order to pay his creditors. Those books formed the basis for the Library of Congress.

7. President James Monroe was buried in New York City because there was no money to send his remains back to his home state of Virginia.

8. Abraham Lincoln was the first president to be featured on a U.S. coin. It was (you guessed it) the penny! Minted in 1909, “Lincoln Pennies” were only meant to commemorate the 100th anniversary of Lincoln’s birth. However, the coins proved so popular that they just never stopped minting them!

9. As a young man, Lincoln owned a grocery store with a business partner, William F. Berry. After Berry died, Lincoln was left owing so much money that the future president started referring to it as “The National Debt.”

10. Early in his presidency, Ulysses S. Grant was pulled over by the police in Washington D.C. and given a $5 speeding ticket for driving his horse and buggy too fast.

11. After he left the presidency, Grant lost almost all his money when he invested it in a business that turned out to be a swindle. Grant was forced to sell his old Civil War mementos for money. However, in light of his situation, Grant also had a $150,000 debt forgiven by William H. Vanderbilt.

12. Eventually, Grant wrote and sold his memoirs in order to pay off his outstanding debts.

13. While he was governor of Ohio, McKinley co-signed a loan to support a friend’s business venture. The business failed, and McKinley was forced to declare bankruptcy. Three years later he was elected president.

14. When adjusted for inflation. Taft was the highest paid president in history. His $75,000 salary in 1909 would be the equivalent of almost 1.9 million in today’s dollars.

15. President Warren G. Harding loved to play poker. He loved it so much, in fact, that he once lost an entire set of priceless White House china in a game.

16. President Herbert Hoover’s first job ever was picking bugs off of potato plants. He was paid one dollar per hundred bugs. Hoover would later study geology at Stanford University and go on to make a fortune in the mining business.

17. Hoover was worth $75 million (over a billion dollars today) and donated his presidential salary to charity.

18. Do you know why President Franklin D. Roosevelt is on the dime? Congress voted in 1945 to place his profile on the ten-cent coin to commemorate the March of Dimes, a charity that FDR founded to combat childhood polio.

19. Harry Truman declared bankruptcy in 1922 when his hat shop failed. It took him 12 years to get out of debt.

20. Truman was so poor when he left the White House that he was forced to move into his mother-in-law’s home. His only source of income was his Army pension, which paid $112 per month. In 1958, Congress passed the Former Presidents Act, which gave him a yearly pension.

23. Mount Rushmore cost $990,000 to build, which is around $15 million dollars in today’s dollars. Considering the fact that it took 14 years for 400 men to literally carve four giant faces into the side of a mountain, $15 million actually doesn’t seem like too much.

25. Did you know that Presidents William McKinley, Grover Cleveland, and James Madison all have their faces on US currency? It’s true! McKinley’s face is on the $500 bill, Cleveland’s is on the $1,000 bill, and Madison’s is on the $5,000 bill. Those bills are no longer being printed, but they are all still accepted as legal U.S. tender.

Them's the facts! The next time you’re worried about your finances, just remember good ol’ Harry Truman needing a literal Act of Congress to get his financial ship afloat. 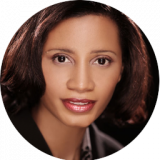 Harrine Freeman is a financial expert, speaker, counselor, writer, CEO and owner of H.E. Freeman Enterprises, a financial services company that provides personal finance consulting services such as credit repair, debt reduction, budgeting, saving, planning for retirement and financial literacy education. Harrine is also the best-selling author of “How to Get out of Debt: Get An “A” Credit Rating for Free.” She has made over 150 media appearances as a featured financial expert.