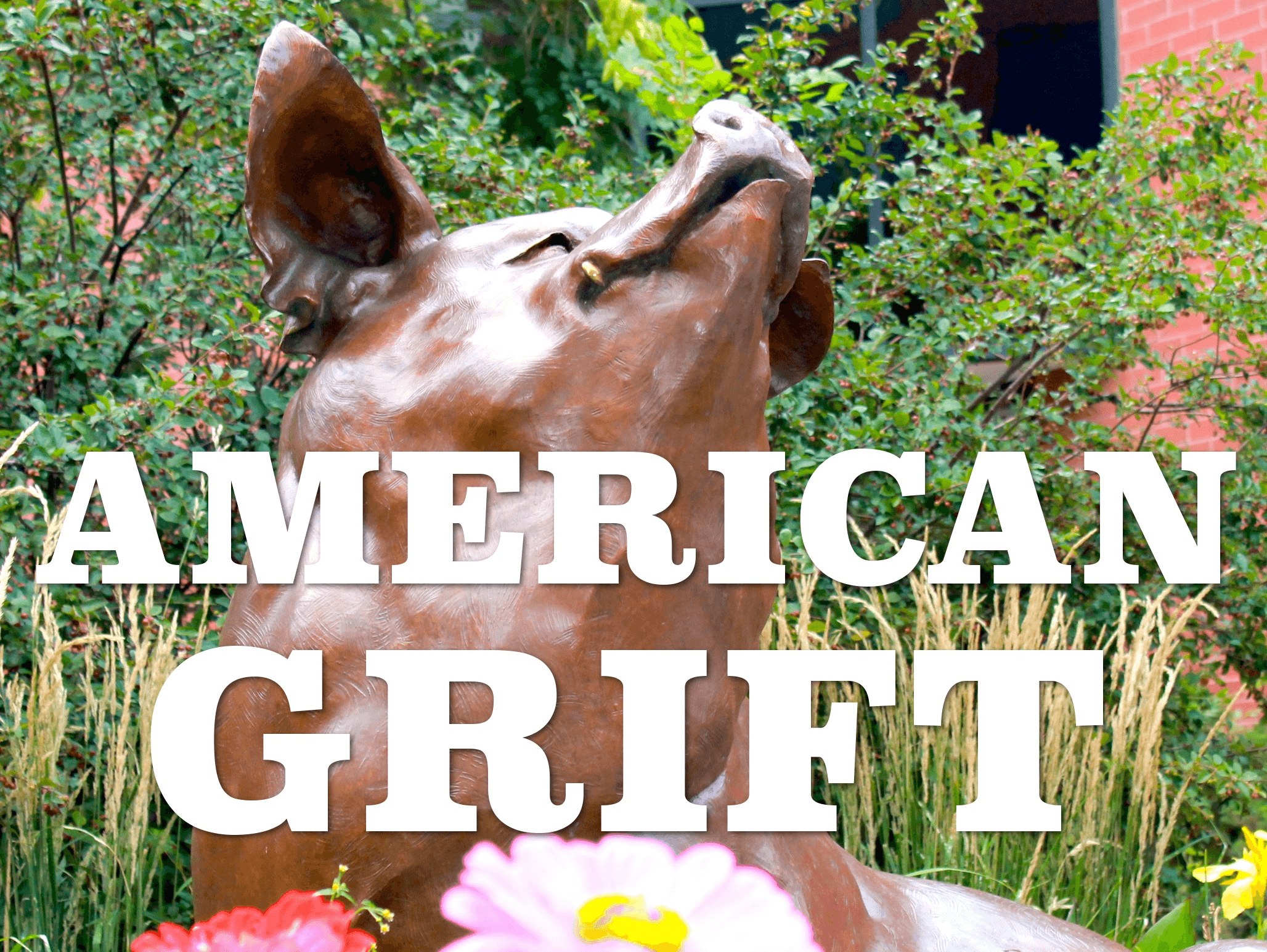 At Inside Subprime, our focus is on scams that hurt everyday consumers. We’re talking about debt traps like payday loans, title loans and any other kind of swindle or con meant to separate folks from their hard-earned money. It’s an interest shared by writer Oriana Schwindt (@Schwindter) who hosts the podcast American Grift (@AmericanGrift).

American Grift is your one stop shop one-stop podcast for all the most outrageous scams, grifts, cons, frauds, chicanery, swindles, and flimflammery. We sat down with Oriana to discuss the show, her favorite topics, and, of course, all manner of grift, graft and greed.

What is American Grift and who do you zero in on?

American Grift is a podcast I started last September. I’m the host, with a rotating group of fellow journalist (and non-journalist) friends who join me to co-host. Each episode goes deep on one outrageous grift that took place in the U.S., though several of our grifts have international elements to them. One episode is about the infamous Fyre Festival, which technically took place in the Bahamas but was a scheme perpetrated by Billy McFarland, an American. Another centered around Jho Low, a Malaysian man who grifted his way through Hollywood and Wall Street and is currently a fugitive. For all of these grifts, the discussion is based on either previous reporting or legal documents.

How did this idea come about?

In 2017, I went on a seven-month reporting trip alone to the geographic center of each state. Weirdly, I came across a lot of grift in my daily life—people trying to get me to join their powdered drink supplement pyramid schemes, a religious “university” that was just a diploma mill, that sort of thing. I was still trying to figure out how best to tell these stories when the Summer of Scam began that year. Every other day, it seemed like, there was some new bizarre grift being exposed. And when I thought back, it wasn’t just a Summer of Scam… there had been a lot of insane grifts in the news that had kept my friends and I talking for weeks way before this summer.

Everyone else in the universe has their own podcast, so I decided to try applying my journalistic skills to a new medium. Why not start my own, and simply record these conversations?

What interests you about grift, scams, or other types of unscrupulous practices.

I think what fascinates me most about grift in general is trying to figure out what leads people down that path. I could never imagine myself operating any kind of scheme. Is it because I lack the confidence? What makes someone like Elizabeth Holmes go, “It’s fine that my technology doesn’t work and probably is impossible to make work, I’m going to tell people it does and get them to give me hundreds of millions of dollars”?

The marks are interesting for similar reasons. As a journalist, I was told over and over again, “If your mother says she loves you, check it out.” So, naturally, I have a pretty keen BS detector. But so many people I came across in my travels in 2017 didn’t. Can we help them develop one? Or are people so desperate to believe they can get rich through “network marketing” that they will always cast aside anything that punctures that belief?

I think the latter is the most likely option. There’s a documentary available on Netflix right now called Sour Grapes, about a guy who sold counterfeit fancy wine. In it, writer Jay McInerney talks about the pact between the grifter and the dupe—the dupes know on some level that they’re being duped, but what they don’t want is to be made aware of this.

Can you tell us about a favorite story you recently featured on American Grift?

A fun one to finally talk about was IBT Media, the company that bought Newsweek for a song and turned it into a shell of its former self. I worked for IBT Media when I was on staff at the International Business Times, their flagship publication. At the end of June 2016, they laid off nearly their whole editorial staff, including me. Lots of people received no severance. One of the company’s founders was recently indicted on charges that he defrauded investors. The history of this company is immensely shady, with ties to a cult-like church, and it was really cathartic to talk about it with my fellow former colleagues.

Can you tell us about the Andrew Therrien story?

Andrew Therrien is a rare hero in the world of grift. He uncovered a fake debt collection scam for tens of millions of dollars. I recommend reading the excellent Bloomberg story, which came out in December 2017 and was the culmination of years of real investigative work by Andrew, but here are the basics: Andrew took out a payday loan years ago. Unlike 80 percent of payday loan borrowers, he paid it back at once and never thought about it again. Until he started getting calls from debt collectors. And then they started calling his wife and grandparents. Then one of these debt collectors made the mistake of threatening his wife. So he started fighting back.

Turns out a man named Joel Tucker—brother of a guy named Scott Tucker who had run a payday lending empire out of Kansas City, Missouri—had ginned up fake debts for 7.7 million people his company had information on, and he had sold those fake debts to debt collectors. Joel was indicted in June by a federal grand jury for this scheme.

Andrew got in touch with me after hearing we were doing an episode based on the Bloomberg story, and I’ll be recording an episode with him shortly.

What common themes do you see emerging in the stories you cover in your podcast?

There are a couple different types of grifter: the guy or gal who simply gets in way over their head, and the total sociopaths who’ll screw you over for a nickel. Anna Delvey, the griftress who scammed a bunch of rich people in New York, seems more like a sociopath. Elizabeth Holmes, founder of Theranos, also leans more toward the sociopath end of the scale. Ditto Scott and Joel Tucker, the brothers who ran payday lending companies out of Kansas City, Missouri and were convicted of a variety of charges this year (i.e. racketeering, for Scott).  A guy like Rudy Kurniawan, who sold counterfeit fancy wine, probably just got in way over his head.

We’re always asking ourselves if the grifter is delusional or a sociopath. This is just armchair psychology that isn’t meant to be taken seriously for a number of reasons, but it’s interesting to think about. If you subscribe to the school of thought that we are what we do, regardless of intent, this question doesn’t really matter. People got hurt, and the person who hurt them is therefore bad. Yet we all seem to yearn for an explanation that goes a little deeper than that. It’s almost like we want the grifter to be someone redeemable.

Then there’s the victims themselves. I like to feature a mix of grifts: those that affected people who will be just fine (rich people, the investor class) and people like Andrew Therrien. Real people, whose lives are worse for having come in contact with the grifter. Sometimes grifts will feature elements of both—Theranos, the blood testing company, was mostly an investor fraud. But they did also start testing blood from real patients, knowing that their technology didn’t work, and lawsuits have been filed alleging real harm like heart attacks because of these fraudulent blood tests.

What does the future of American Grift (the show and the general crime) look like?

I have no idea how long I can keep this up—I’m currently losing about $20 a month doing it, and it’s a lot of work. Work that I’m doing completely on my own. But it’s also really enjoyable. I love having these conversations, and the crimes themselves sometimes merely serve as a jumping-off point to talk about some phenomenon, like that of YouTuber culture in an episode about a failed YouTuber convention called TanaCon. And what’s thrilling in an awful way is that we’ve only just barely managed to scratch the surface of high-profile grift in America. I have a Google Doc full of dozens of ideas, and every other day, someone sends me a new one.

American history is rich with grift. This is not a new phenomenon, and I don’t even think we’re seeing a serious uptick from the days of yore; recall that the Ponzi scheme got its name way back in the 1920s, and the “taking from Peter to pay Paul” scam had existed long before that. What’s changed is how aware we are of these grifts and the people involved. And I and my co-hosts will be there to talk about it all.